We wanted to find a strong and short name for the band so we ended up on a single letter that represents the two of us. Each bar of the letter “V” simbolyzes one of us, so in that exact point where they both meet, it’s where The V’s is born.

Although musically talking, The V’s stands for wild, aggressive, straight-forward Rock and Roll..! In the end: It’s The V’s, that’s all you need to know 😉

Two of you guys (EzZe and Roman Fleischer) are originally from Buenos Aires, Argentina. Why did you move to Germany?

It was the paths of rock, life and fate which brought us here but the funny part of our story is that we used to hang out with the same people, go to the same clubs and even play music with same guys ten years ago back in Buenos Aires and never actually met each other (at least from what we remember, old days are…well, you know…a bit blurry) 😉

…and how did you meet your bass player, Andy?

After Kris (Sinister Kris Combo) and us part ways because he decided to dedicate himself full time to his own musical project, we had to find someone else to fill that space and the one to come, had to be as good as he was. (Not an easy task).

We would give auditions to bass players for weeks. One day looking trhough the web, I found Andy’s profile on a site, where he was playing for one artist I really like called T- Raumschmiere and tried to contact him via email for a while until I found out that some how I’ve missed one of Andy’s replies, so i wrote him back and soon we’ve found ourselves working together on the songs. So, once again, internet saved our ass.

Roman came up with the ideas for the songs, sometimes a riff, sometimes a rough structure of the song, then I write the lyrics and create the vocal lines and sometimes edit the songs to fit the lyrics. Most of the times that’s the way we write our music, however there’s a new song that came from Andy and we can’t wait to get to the studio and record it!

Who is the „Narcolepsy Girl“ and why is she floating?

The Narcolepsy Girl is a character I’ve created in my head inspired by a friend of ours. A kind of “bad ass Super hero” that comes to your dreams and scares you to the death but with the singularity that every time she’s about to catch you, she falls asleep and vanishes away because of her condition. I like to mix reality with fantasy..

You’ll find a lot of that in my lyrics. About the cover: She’s floating in dreams between fantasy and reality again. Sleeping…waiting for the right moment to strike.

“My Venom” rings with the sound of irony. Especially in the first few lines it seems like you are talking about your experiences with dogmatic Christians. What is the story behind “My Venom”?

Alright…My Venom. Nothing to do with religion here actually. Normally, I don’t like to explain my lyrics, I prefer that the people give my lyrics their own meaning. However I want to say that on this “new era” of the band I’m trying to dive much deeper into my feelings and put them on my writings.

What’s coming up next in the The V’s world?

Our main goal in 2017 is to go to the studio and recording what’s gonna be our 2nd album. We are currently working on new songs, some of them with lyrics in English and Spanish, and trying to find financial support to make it happen. One option we are considering is crowdfunding. We did it in the past and it worked very good. If we decide to go with CF , our fans will play a big role in that.

We’d like to take this opportunity to thank you for this interview and for choosing „Narcolepsy Girl EP“ as „Album des Monats“ and also send a big thank you to all of our fans, friends and family for their unconditional support throughout the years. 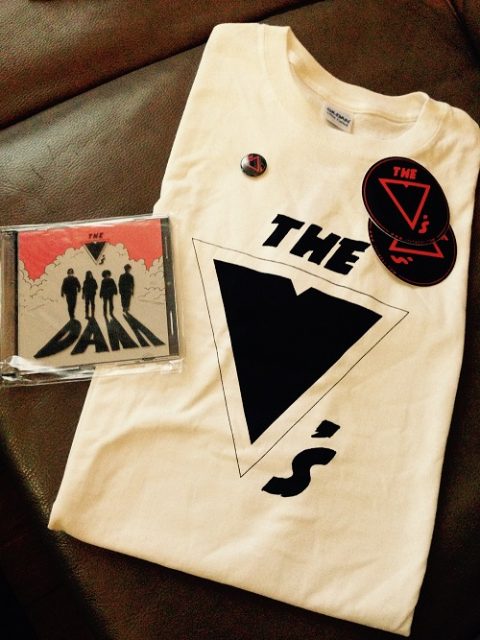 A raffle with Merch of The V’s will start today on our Facebook page at 6 p.m.

Answer The V’s question in the comment section under the raffle post on our facebook page and win a „Dawn“ CD, a T-Shirt (size: L), stickers and a pin if you are the lucky one. The question is: What do you like the most about The V’s?

The raffle ends on February 19 and The V’s will pick the winner. Hurry up and start the finger typing dance!